Richter's report linked at the end of the post.

Our heroes took a full week of rest to recover from their most recent ordeal. Majority of them engaged in menial task around Rantar's keep, as well as some carousing and drinking with the locals. Owsley, an outdoorsman deprived of human touch, decided to hit on one of Rantar's wives. A brave man he is. Either that, or easily motivated by his peers and some fermented barley. His attempts fell flat; and luckily for him, Rantar wasn't around to liberate him of his head.

Richter the Ruddy also went big on drinking, spilling his guts to whomever had the patience to listen: “When I was a boy, my father, who was a peat digger, came home one day and took a solid look at me. ‘All day I shovel shit, and for what,’ he said, ‘so I can come home and look at more of it!’ And from that day I was made to sleep in the hog pen with the sow. The local children were cruel. They called me the Hogling and screamed oink oink at me. When I stood up for myself and told them to stop, they whipped my hide with reeds. Whipped my rump raw!”

Lir, the priest of and only honest man in this party, spent his time meditating. On one occasion he attempted to commune with his deity by divining over a cup of tea. The tea started swirling; slowly at first. Then it kept getting faster and faster, and just when he closed in and squinted to understand it better, it suddenly took the shape of a watery spear and rammed straight into Lir's pupil. He didn't have good time.

Owsley, liquid courage still in his veins, decided to befriend a guard on duty, so he could steal some spears. His plan was simple: sing some shanties, have some good time, and then quickly nab some spears and pretend they were always there.

Barry's ocean-blue eyes welled “Ou- Owl-” he stammers “OVULY!” “Is that why we've had such great time!” Barry is an honest man in his early thirties, his family in a nearby hamlet. He told Owsley everything about his sheep, his gorgeous Jannette, and their three children. He's been serving Rantar for some years now—much better pay than tending the fields. He couldn't hold back anymore, and was bawling by now “IS THAT WANT YOU WANT!” shaking his spear “AND I THOUGHT YOU WERE A GOOD MAN! A FRIEND”

“Hey hey, come on now. It’s nothing personal! I’m still your friend! It’s just that I need some more spears to support my livelihood but I’ve got no coin to spare for it!” Owsley put his hand on Barry’s shoulder. “I shouldn’t have done that to a friend like you, Barry. How about I go hunt us a nice critter and l’ll cook your family a nice meal and this can all blow over, yeah?”

“Are you for real? Or is this another of your tricks?” Barry inquired, wiping his snots.

“I swear it on my honor as a Ranger, Barry. May the great Baytnorn, God of trees, make a tree fall upon my head and kill me if I lie.” Owsley replied.

Barry wiped his snotty face “I knew you were real. After all, real eyes realize real lies!” A branch from a nearby tree fell off.

Indeed, our fine heroes spent their rest days well. Richter was seen going out and about, until he returned one day looking all sour and smelling of cat piss. From that day on he painted his shield as follows: 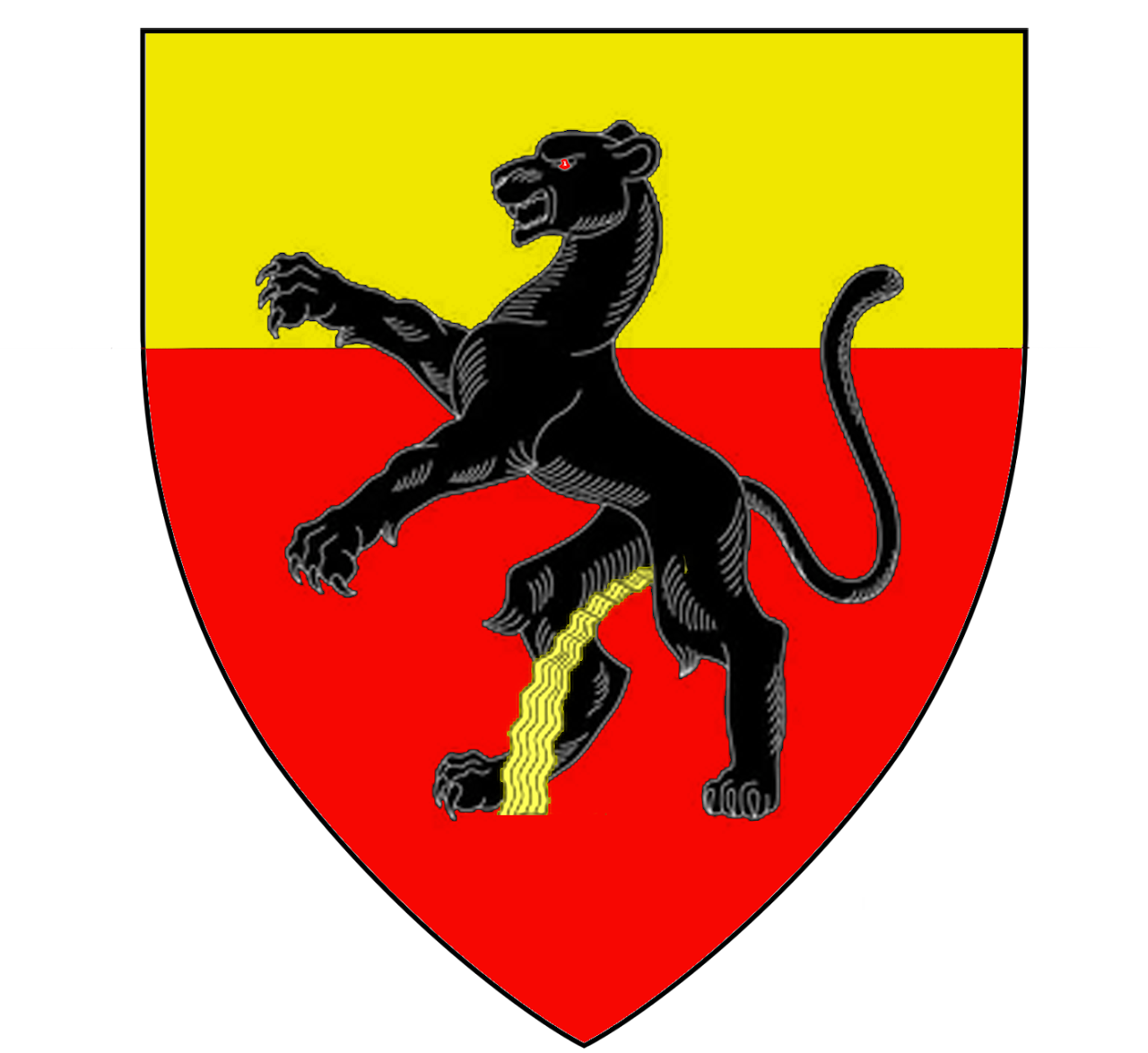 Smart as they are, our enterprising adventurers decided to recruit some meatshileds—ahem, retainers. Richter managed to recruit Euin, a local drunkard, while Melvin and Tsielpffn convinced four local boys to join them:

Samton, a burly man who ends 90% of his sentences with “eh?;” Nolgar, a sheperdboy looking to get rich quick; Larlo, thirsty for goblin blood and Tsielpffn's mentorship; and Gryx, the only one with actual weapon and armour—spear and leather.

On the morning of next day, they set out to recover riches Arder told them about.

After two days of unmolested travel, Euin led the party to ruins of Deeridyll. What once was a hamlet, now was nothing but four dilapidated huts.

“The boys! The boys are back!” an old, stuttering figure shouted, emerging from the darkness of one hut. An old man, Altanian if it was to be judged by the colour of his skin, slowly approached the party. Despite his enthusiasm, Richter and Tsielpffn responded by pointing their spears at the old man.

“What? Why would you do treat me so? Boys...?” old man's eyes revealed nothing but child-like innocence. He did look to be in a rather poor shape, with flaking yellowish patches of skin hanging from his limbs. “Come! Come to my home. Come boys!” he uttered and dragged himself back into the hut.

Melvin followed; Richter took watch from outside; and Tsielpffn took Nolgar and Gryx for a crash course in wilderness surveying.

Old man's hut was dirty and unkempt. Ground was nothing but soil; a pile of straw was a bed. There was a pot hanging over some embers in the corner; a dark-brown stew rested lazily in it. The hut smelt of bodily odours and smoke.

Old man only spoke of “the boys” and how happy he is that they are back, despite Richter's and Melvin's best attempts to find out what has happened here. Euin said that there were some people that refused to leave the hamlet, and that perhaps the old man was one of them.

Unlike his colleagues, Tsielpffn did manage to find useful intel—a black spire to the north-east that looked very similar to the landmark on their treasure map. Plans were made to head there first thing in the morning.

Old man was delighted to offer his hut to he party, but only Melvin, Samton and Larlo took him on it. Richter and Euin selected another hut, while Tsielpffn and his mentees selected yet another.

Tsielpffn's keen ears picked up sounds of cracking branches and shuffling leaves. Something heavy was moving outside of his hut. He quickly but slowly jumped up, and instructed Nolgar and Gryx to ready themselves in darkness.

Richter, in another hut, heard it as well. He kicked Euin awake, and they readied themselves, opting to stay in darkness of the hut.

Old man and Melvin heard it as well. “Oh no, oh no” the man stammered “follow my lead boy, if you wish to live!” He started to rub himself with dirt and dried feces. Melvin obliged, and so did Samton and Larlo.

The cracks were gone, now replaced with heavy thuds.

Tsielpffn could hear them coming closer and closer. “Ready yourselves” he growled through his teeth “do exactly as I say!” Leaning against the rotten planks, attempting to see anything in the darkness revealed little. There was something out there, but what?

“Boy, lie still, lie still...” was the last thing old man said before dozing away. Melvin and his compatriots obliged once again.

Richter's hut was filled with the sound of Euin's trembling jaw. “Get it together!” didn't help him at all. Richter positioned himself just behind the improvised doors—nothing but a plank of wood leaning on the ramshackle hut—to stop whatever might try to come in.

Euin was now trembling proper. One could hear his knees clicking, his jaw clacking, and the his back gently tapping the wall of the hut. “Come on, get it-”

Just as he was about to finish his admonishment, the hut came crushing down, revealing a massive owl-headed hairy figure towering behind Euin. It tore through him in a blink of an eye. Just as he was to avenge his fallen comrade, Richter immense pressure behind him, followed by unimaginable pain. He went up and down, his flesh torn to shreds; massive beak ripped his muscles; he could see Howla and Vannis clearly as he flew through the air; landing face-first on the soil in front of the old man's hut.

Tsielpffn and his team carefully opened their doors, intending to surprise whatever might be out there. Alas, they were unaware of the fate suffered by the Ugly One. Only the elf could make sense of what was happening, for they all fought in the darkness. He weaved his hands, attempting to sleep the massive bear-like figure in front of him. Alas, he only succeeded in attracting the creature's attention. It went through the hut like it was made of paper, crushing Gryx in it's charge.

The elf put up a bloody fight; cursing and growling at the cursed creature with his every breath. He was clawed, he was bitten; his body was torn to shreds, but his resolve remained unbroken to the very end. Nolgar shared the fate of his master.

Melvin decided he couldn't lie in wait any longer. “No boy, don't! Don't!” the old man pleaded, but his words fell on deaf ears. “Light up the torch!” Melvin instructed Larlo.

What a sight it was. Ricther was lying in front of them, resembling a collection of strips of flesh. Nothing but planks and bloodied remains were where once a hut stood. And on it a monumental bear-like creature stood, feasting on whatever was left of Euin. It raised it's unholy head, revealing massive beak and owl-like features.

Driven by raw instinct, it immediately charged the light source, severing Larlo in half. As did the torch extinguish, so did any remaining atom of courage in Melvin and Samton. They fled for their life in blind panic, each going their own way.

Melvin ran through the night—a man who used to sleep whilst others were exploring the keep—stopping at nothing and for no one. “The black spire, the black spire...” he braved himself, hoping to reach it as soon as possible... But running and finding direction is difficult in darkness, even with two moons...

Exhausted and expended, Melvin stumbled out of the woods with the first rays of new day. His tired eyes had seen what he yearned the most for—glorious flowing handle-bar moustache and muscle-bound python-like arms of Alric the Fighter. There he stood, at the base of great black obelisk.

Was it a mirage?

Finding strength, the wizard stood back up and continued his march.

By now the fighter was running, ready to embrace his beaten comrade in his safe arms.

“Back where? What happened! Speak man!”

“They were hacked! Smashed! We have to go back!”

Alric was joined by two elves. Belanor, a mohawk-rocking ex-slave on a path of vengeance, and Gon'd'elf, a silver-headed and silver-eyed magnificent specimen. Neither of the two were too enthused with the wizard's plea. But Alric had a soft spot for his friends. And so they marched back.

The found four huts as they left them. Utterly crushed. No bodies in sight. Only bloody remains. “The boys are back!” Oh, the boys are back!” The old man was still in his hut. There lay Richter, pale as the robes of Priestess of Feninva. “Richter!” Melvin and Alric gasped simultaneously. They knelt next to him, and tried to shake him back to life. Alas, nothing but a corpse laid before them. “He is hungry boys, step aside please...” the old man muttered, and fed the cold corpse some of his stew. It spilled all over Richter, enraging Alric “It's enough old man, he's dead! Please, stop!”

They buried Ricther by the black spire, leaving his shield on his grave. 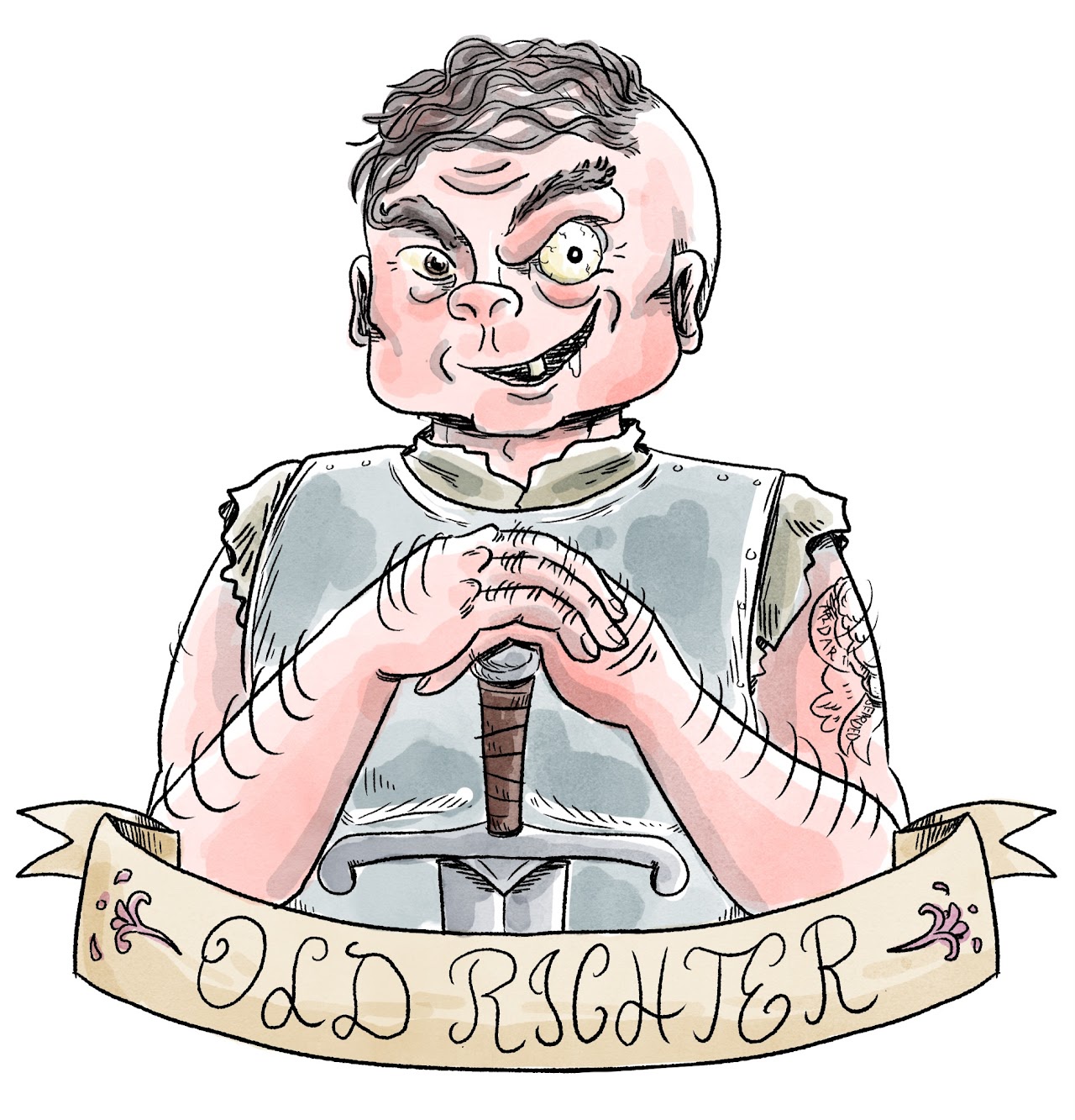 Taken too soon. The pantheon has one more Saint in its ranks. You may have only had two points in charisma, but you were beautiful. Good night sweet prince. Rest in Peace Richter the Ruddy. Torn asunder by an owlbear at the ruined village of Deeridyll.

The Gods of Wilderlands can be cruel in their mercy.