Richter's, Reedo's, and Alric's reports linked at the end of the post.

Having survived their harrowing trip to Rantar's keep, our band of brave adventurers spent the next five days licking their wounds. Richter the Ruddy, and his gang of opportunistic misfits—Arder & Arlic—tried to fleece the local soldiers. They did their best to set-up a game of two-up, creating noise and ruckus.

Few locals gave it a go, but quickly left after losing their hard earned silver coins. Richter “The House Always Wins” walked away with a stunning haul of 2 silver coins, 8 copper coins, and 0 new friends.

Rantar, their generous host, offered them some coin and supplies if they take care of an abandoned keep just south of his. He'd also provide them with a skilled guide, to make their jungle voyage less perilous. His scouts reported that they've witnessed some goblin activity around it, and he assumed they're trying to turn it into their new lair. Something he won't tolerate.

Arder tried to persuade our brave adventurers to ignore that offer, and pursue his treasure map instead. Alas, no matter how much he pleaded and begged, our adventurers had made their decision. Justice shall be served! For a fair share of coin, that is. Some even went so far to question the veracity of Arder's map, but that is best left forgotten.

And so our band set out on the dawn of Dewsnap 1st, led by Ibor into the thick jungle.

“Wake up, you sloth!” a flurry of curse words and splash if ice-cold water brought Jaha back to consciousness. He found himself dressed in tattered clothes; his hands manacled to an iron ring firmly bolted to the ground. With his body covered in bruises from toe to temple—he foggily remember being beaten and dragged around—even the smallest move made him shiver from pain.

“Hey! Hey! Here! Focus on me!” a human dressed in chainmail aggressively waved their hand in front of Jaha.

“Come on, don't feint on me now. Your sun-worshipping friend is done for, fate worse than death befell him, all doing of his own. Now, I had to make hard bargains to keep you alive.”

“I know your kind has been secretly mining Lagh Anon. They will surely be happy to save one of their own! How about you write them a heartfelt plea, asking for a small donation of 800 gold coins?”

“Ay Allon dead it can not be...” the dwarf glumly stated after a long period of tangible silence.

Summoning strength from some netherplace, Jaha continued “I'm afraid I cannot oblige your request either. I have no idea about any mining at Lagh Anon nor would I help out any ruffian like yourself. But I believe it would be in your best interest to release me if you would do so kindly.”

“Oh, the audacity to speak so! After you've begged my men to spare you? This is your last chance—pen this letter, or so I swear to Harmakhis, I'll sell your hide to Kalakia herself!”

“Ay that was my own coin not a stranger as I say I do not know them. Either way, I would recommend my release as if I’m held captive or killed my allies who escaped will surely rally forces to take their revenge! You may have one our last encounter but that was due to sheer number when my friends return with a squadron of well trained fighters that number issue will be minimal and I’ve seen those thugs fight—they don’t exactly command like full soldiers.”

“Nonsense!” cracks in human's voice his uneasiness “Let's see if spending a few days with Kalakia will change your mind!”

“Just remember boy—my survival is your survival!” was the last thing Jaha shouted before being dragged into the darkness... The human wiped sweat nervously.

It took our adventurers two days to reach this abandoned keep Rantar spoke off. Their biggest nuisance were large insects and sharp overgrowth. Ibor knew the path as the back of his palm, ensuring their journey was as uneventful as it was. But from now on—they were on their own.

The party decided to split, with warriors making the camp with Ibor, and thief Saga-Bhoy, halfling Reedo, and elf Myst, forming a scouting party. Following their tried-and-tested methods, first fielded in the abandoned keep near Kestizar, the scouting party made cold-camp some 200 yards away from the keep. The trio took turns observing the keep during the night. And indeed, a loud noise akin to the mountain mating song, woke the up in the dark of Dewsnap 3rd.

Undeterred, Myst and Saga-Bhoy advanced under nothing but moonlight of Howla and Vanis, with brave Reedo following them some 90 feet away. From then on, they could rely on nothing but their tactile senses. And so they caressed the keep, following its curves, nooks, and crannies, trying to find the source of mysterious noise. Few grunts in the darkness were enough to send them packing. “We found out what we needed to find out!” Saga-Bhoy whispered loudly, as he retreated into the darkness gracefully.

They rejoined with the remaining adventurers just as the first rays of sunlight hit the camp. After some discussion, our band decided to circle the keep, and approach it from “behind,” i.e. the side opposite of the main entrance. This small fort was a vestigial remnant of antediluvian empire of Kelnore. That it still stood, despite its dilapidated condition, was a testament to the long fallen empire.

From the sketchbook of Richter the Ruddy: 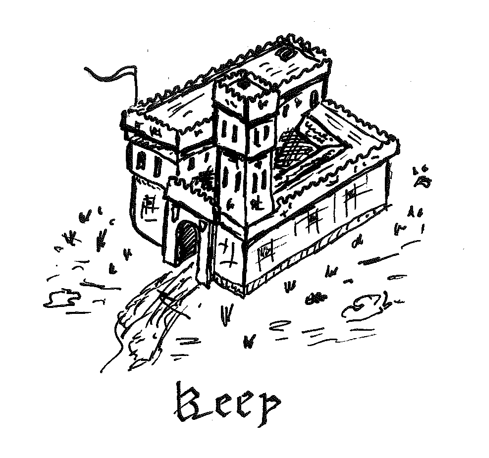 The party cautiously advanced to the palisades. Once they were there, light-handed Saga-Bhoy scaled the walls, reaching the wall walk, and then threw others a rope. At one moment he heard a loud cracking sound to his left, almost like someone breaking a piece of wood. Perhaps that would make him run during night—but now was day! No fleeing in broad daylight!

A few turns later, and all were up. Just in time to be ambushed from multiple sides. It was only thanks to Saga-Bhoy's keen senses that wasn't a bloodshed—for he saw ugly bobbing heads before they had a chance to act.

Alric and Richter burst through the closest doors, literally sending the wood flying. There was loud noise, made by the cutlery that was stacked in front of the doors. Others tried to take a shoot at devilish creatures above them, but they were too well covered.

A slew of rocks was the response, one lodging into Arder's uncovered head. He stumbled for few steps, before falling flat on his face, the wedged rock splitting his head wide open. Two arrows flew from south-east, one lodging into Myst's leg, nearly severing it.

New round saw even more chaos-with everybody running in, except Richter, who was driven to mad rage from seeing his “boy” Arder going down in such gory way. Alric had to drag him back in, sans he ends the same way as the bearded drunkard.

Saga-Bhoy, the sharpshooter, managed to take down one of the critters hidden in the south-east tower. Alrich, Richter, and Reedo scaled the ladder, and brutalised two goblin critters. Saga-Bhoy surprised them from behind, and caught one at the far end. Myst took down another hidden bastard.

Richter had no sympathy for the surrendering goblins—he and Alric chucked one off the palisades—whilst Saga-Bhoy accidentally clubbed the other to death.

Myst, the only one who remained in the room below, noticed a large pool of transparent liquid—water?—slowly advancing towards him. That fascinated him so much he failed to notice three critters behind him.

He gently prodded the pool with the tip of his sword... Only to find it melting away with the sizzle. Myst might've been a failed bard, but his adventuring career was about to take a rather grim turn. In a blink of an eye, the liquid engulfed his feet, climbed up his sizzling sword and legs, melting away his flesh, penetrating into the very core of his being.

Richter might've wailed like a wounded seal, but the sound let out by Myst is beyond human comprehension. Perhaps another bard could find proper words for it.

Reedo took down a critter running across the courtyard with a pebble from his sling shot, an amazing feat considering all the conditions. It was the sound of horn that convinced our brave party that it's time to deploy a tactical retreat. They made sure to recover Arder's body. Myst was left behind, a pink slime in a transparent pool.

Who knows what will happen next...