Eccy Throi's report linked at the end of the post.

Sinai gripped the whip in his hand as three crooked, deformed trees slumbered towards him. Phelim “The Scorpion” stood next to his master, ready for whatever was about to happen.

It's been nearly four hours since they've entered this forsaken place. So far everything seemed natural; water made its way through the winding caverns and tunnels. And yet, what now stood in front of them was obviously unnatural.

Rhovar pulled Sinai back, taking his spot at the frontline. The party decided to fall back and tighten their ranks in the narrow tunnel. There, their four toughest warriors would slow down the trees, while the others would engage with missile weapons from back ranks.

It was a glorious ninety-second skirmish.

The trees slumbered after the party, with only one managing to catch up with them. The party filled it with arrows, to which it responded by battering Rhovar. Adkin was quick to abandon his bow for a polearm. He soon discovered a natural gift for felling trees. Rad's bow was working overtime—the only time arrows wouldn't be flying is when he was chucking oil flasks.

Indeed, the young thief has proven to be quite a lumberjack (and pyromaniac!) himself. Not even a minor slip prevented his barrage. Unfortunately, Ehrman wasn't as efficient. Although he tried his best, he knocked himself unconscious early on in the battle. To add insult to injury, once he came back to his senses, he somehow managed to get tangled with Norna “The Repulsive,” causing them both to loose precious time.

By the time they finished, the dead blackened trees were pilled so high they started blocking the water stream. Worried they might get washed away, the party spent some time rolling them along one of the tunnels, allowing the stream to flow freely once again.

“Who are you and what have you done with these trees!”

A duo of buff elves surprised the party with their inquiry.

“These were no normal trees. They were hateful and assaulted us! We are here on a mission to help the good people of Bathdawn. Hail Hydra!”

The duo scanned heavily armed party and introduced themselves as Eccy Throi and Taegen Ianlynn. They claimed to be here on behalf of their master Rinendirlan Ælasyn, investigating something of great importance.

After some minor pleasantries, both parties decided to join forces in bringing an end to whatever evil lurks here. Indeed, once the elves have landed their hands on dead trees they knew something was amiss. All of them felt off. All nine of them emanated aroma of suffering. Something here was very wrong.

The chamber they found them in was some thirty by thirty feet. Glowing moss that hangs from the ceiling in long, frilled strands illuminated it with a blue glow. The stream flown in from the northwest and turned west, to the tunnel they came from. Three artificially made canals sprawled eastwards. Three earthenware pots were in each; they used to house the hateful trees. Now they lain crushed to pieces.

A dry corridor extended further east. This was perhaps the first dry piece of soil they've seen since descending into this cavern. Alas, it didn't extended that far. In fact, it led the party to another stream, albeit wider and louder. This one has flown from north to southeast, terminating in a loud, crashing waterfall.

This time the party decided to go upstream. Rad noticed a narrow passageway to his right. It was just wide enough to fit one person. Eager for some action—maybe due to the leftover adrenaline from the previous encounter—he asked fellow adventurers to tie a rope around his waist. That was all the security he needed to go explore the mysterious tunnels on his own.

Half an hour and one dead-end later, the Master Thief had found another exit. It required a bit of crawling, but what is that for our Rad? Nothing.

Another dry tunnel. And a surprise! Looking at whence he cometh from, Rad had seen a huge stone face carved into the stone wall. The narrow tunnel he came out from was actually the face's open mouth. The face itself looked barely humanoid; almost like a mockery of human features.

Unwilling to risk it further, he went back and informed the party of his findings. The party decided to further investigate the corridor Rad had found. Since the tunnels were so narrow, it took some time for all of them to crawl through. Luckily for them they were unmolested.

The tunnel they found themselves in extended north and east. It was eerily quiet; especially after listening to overwhelming sounds of rushing water for most of the day. Rhovar and Adkin went to investigate the eastern path.

There they found a chamber covered in blue-green moss and lichen. Some patches were more colourful than others. The warriors quickly found this was no regular cave. As they got closer to the moss, they felt a slight pull towards the center of the chamber. The iron piton they threw in there hit the ground... And then started to slowly rotate towards northeast.

That was enough to send the fighters packing.

Following the passageway northwards was no less surprising. This time the whole party advanced, only to encounter a chamber blanketed with minuscule, bulb-headed yellow mushrooms. The wood elves did not recognise them, but both thought they probably aren't poisonous.

But that was not all!

Rhovar noticed a fist sized rock levitating at eye-level slowly approaching him. It looked as if the rock was gliding through the air. Its features became more apparent as it came closer: it was a carven stone head, similar in style to the large stone face they crawled out from.

Rhovar and Adkin, our favourite fighting duo, took out a sack and charged the head. Their boots got covered with vibrant yellow paste as they crushed the mushrooms. The floating head offered no resistance. Unsure what to do with it, the party hammered the sack to the cavern wall using several iron spikes.

Stepping deeper into cave revealed a passageway sloping up. By now the whole party had bright yellow boots. Following the upwards path led them to another chamber. Yes, there was something surprising in this one as well.

As they approached the mouth of the chamber, their torchlight illuminated three human-shaped figures hanging from the ceiling. The elves recognised the shapes as pea-pods, but man-sized. The room reeked of rotten fish and vegetation.

A human shaped figure stepped from around the corner. It was covered in knobby fungi. Two large yellow bulbs stuck out from its hazelnut-shaped head. It outstretched its weird looking arms and shambled silently towards the party. 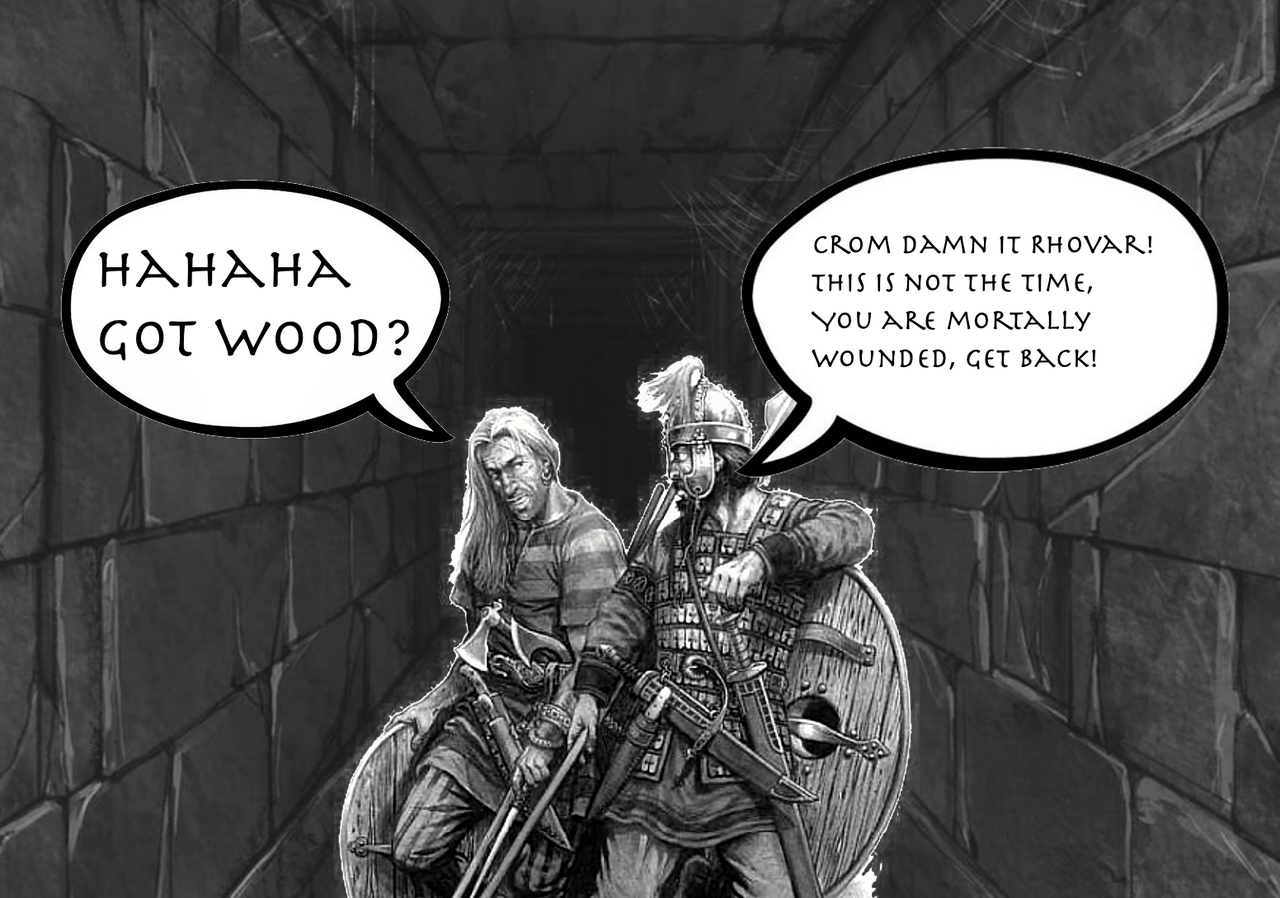