“Retreat to safety!” the elf commanded. Rhovar was grievously wounded in the ambush just moments ago, and he required immediate care. The party managed to slay their hobgoblin enemies, much due to elven arcane tricks.

Once they were back in safety of their camp, they decided to observe the mine entrance for the rest of the day. A tall, broad shouldered figure dressed in white hooded robes, approached their camp. The man was Sinai, a desert cleric from Queans Waste. He quickly demonstrated his worth by healing Rhovar.

Not a soul came in or out of the mine.

They came here to explore the mithril mine where Aergal Firebeard's son went missing some six months ago. Unwilling to risk another ambush, Rad scaled the hills by the mine entrance, in search of any other camps or entry points.

Lo and behold, nearly an hour later he found a shaft with primitive elevator. The hole was bounded by simple wooden fence. Three wooden pillars were connected with a cross above, and a simple—but sturdy basket—was suspended with two thick ropes. Rad felt like two persons could fit inside. There was a crank on the outer side of the right beam. The whole contraption looked old and unused, but still functional. The thief quickly found his way back, and informed the party of his findings.

After some discussion, the following adventurers went to explore: Rad, Sinai, Gon'd'elf and his two retainers—Ehrman and Ariad. Elf noticed a sight most terrifying, just as they were approaching the sight: a great black dragon was flying far above. The brave heroes quickly hid in whatever bushes and overgrowth they could find around. It seemed as if the dragon came from the direction of the Romilion Sea, and went further south-west.

It took them some time before they emerged from their hiding spots. Had to make sure the dragon is really gone!

How does one explore a shaft that leads deep into the mountain? The party tried throwing stone, lowering the lantern on a rope, staring intensely into the darkness... They learned one thing only: it is deeper than 50 feet. Finally, Rad had enough, and asked to be lowered down in the basket.

Old and unmaintained, the contraption creaked and moaned, as Rad went deeper and deeper. It took some thirty minutes, but the thief had emerged into a cavernous chamber. It was full of foul smell. Rad could see five sacks filled with straw. Three were roughly human sized, and two were much larger. His light barely illuminated two exits, one to the east, and one to the south. Too scared to investigate further on his own, he shook the rope, hoping his friends above would understand the signal.

“Take him out!” the elf commanded. Rad's relief didn't last for too long—two arrows that came from souther darkness barely missed him.

What followed is best described as extremely cautious delving. They party took their time and advanced with great care and slowness. After few hours, they arrived to the same room Rad was in before. It was an irrefutable fact, supported by the evidence of the shaft, five sleeping sacks, and two arrows stuck in the beams leading up to the ceiling.

Collecting their courage, the party went into the south corridor... Only to discover noone there. There was a split, a T-shaped junction leading west and east. Both sides descended further down. West side terminated in a stone wall with large reinforced doors, while the east side seemed to curve further. Leaving Ariad behind to watch their back, the party went to investigate the eastern tunnel.

Another dark cave—albeit with a small difference: a bloated trapdoor in the south-east corner. Rad failed to open it—thrice! Gon'd'elf watched guard, omnipresent being he is, while Sinai took a look around. Alas, this was no desert.

The party quickly ran back, ready for some violence. By the time they arrived, Ariad was locked in melee with a large hairy brute and a massive deformed wolf. Everybody but Rad joined in the brief, but brutal melee. Ehrman decapitated the wolf with his greatsword, while Gon'd'elf skewered the hairy monster with his polearm.

“They burst from the doors to the west. You've taught me well master—and I kept my watch as you instructed!”

Unwilling to risk further assaults from behind, the party descended down the western tunnel, intent on exploring what lies behind the doors. A fifty foot long and thirty feet wide chamber it was. But this was no natural cave; it was a man made chamber. Two long wooden tables, flanked by wooden benches, indicated this might've been a mess hall once. Iron rings and manacles in the north-west corner told a story of their own, as did the scratch marks on the floor... Was this where the monstrous wolf was chained?

The door far west side of the room led into a broad tunnel. Onwards and downwards the party went! An hour or so later—it's difficult the tell the passage of time when one trods through dark and monotonous tunnels—they emerged into a chamber so massive their light showed nothing but darkness.

“Let's crawl east-ward, alongside the northern wall...” Indeed, after another half an hour or so, the party found a tunnel framed with wooden beams. The sign to the side said “Exhausted mithril node.”

“Well, if one were to keep prisoners, they'd probably throw them in some dead end like this?” the adventurers were quick to hypothesize. Only one way to find out.

Following the tunnel for another half an hour or so, they arrived to a dead end. The tunnel was cut short by a pile of rocks and stones, that seemed to be some sort of cave-in. Just before the cave in was a hewn chamber. There was a small wooden desk, and two rotten chairs, as well as some mining equipment strewn around on the floor. Old-looking ladder in the north-east corner went up into a claustrophobic-looking shaft.

While exploring the chamber for any valuables, few of the members picked up on the weird grumbling noises coming from behind the debris in the dead end. Stopping to listen, it definitely sounded like some sort of language. The voice seemed agitated. It went quiet once Rad came closer and asked a question in common.

“I am Bergal Firebeard, and this is my mine! I've been stuck here for months! Can you please get me the fuck out of here?! There are some pickaxes by the side. Start by removing the rocks by the left side, that will prevent further cave in...”

Following Bergal's instructions, the party was able to set him free after an hour of work. The dwarf that came out had the most offensive smell imaginable. His beard was large and scruffy, and apparently home to few fungi as well. Sinai almost offered his water, but then decided to drink it himself, instead.

“I've been working here with my crew when we got ambushed by those foul hobgoblins. I'll kill them all with my two hands!”

“How about we get you out first, and then you can come back for vengeance?”

And somehow that was enough to convince this half-mad dwarf to follow them. It turned out that the ladders led into the cave chamber where Rad was unable to open the trapdoor. Luckily, he was able to open it from this side. Moving quickly, the party reached their camp unmolested.

Having had a brief moment of respite, they asked Bergal to rest in the VVagon, and then took off for Antil. The dwarf was complaining all the time “Six months gone, and my father sends someone just now? What a greedy bastard!” They arrived on the morning of Warmshade 1st.

“You know, I'm not as mad as I seem. You have saved my life, and for that I will be forever grateful. Once I retake my own mine, I promise to craft a mithril weapon or armour of your choice—for each one of you. Rad, Guha, Rhovar, Sinai, Francis, Dolgo, Ariad, Ehrman, and yes, even you Gon'd'elf—I'll remember your names forever!” 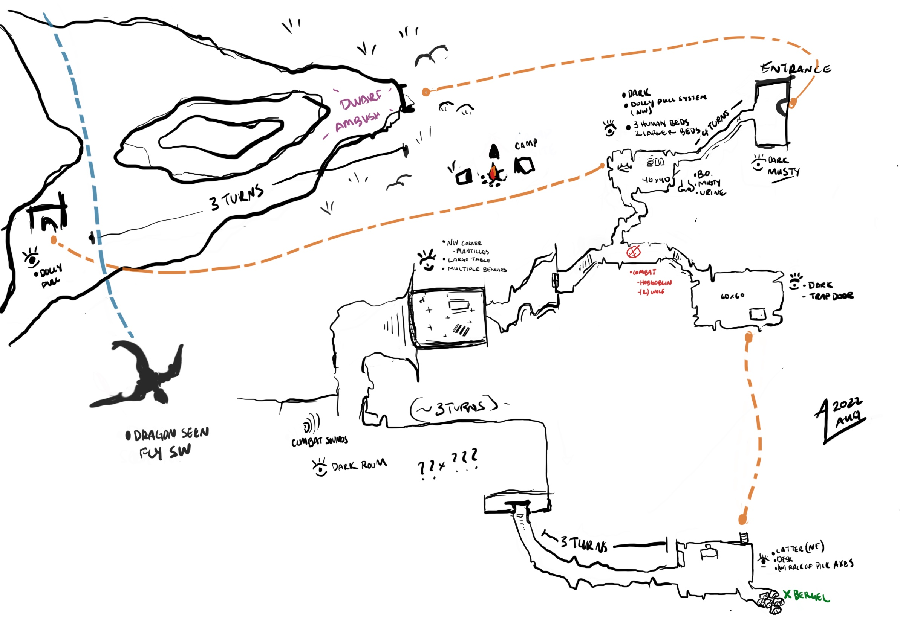