Winslow's and Deter's reports linked at the end of the post.

Leaving their fighter to the doom of his making, the party successfully fled the pursuing mass of monsters. While most were into recovering and lollygaging around Antil, Rad and Winslow felt a bit more ambitious.

They remembered Sir Fondleroy, whom offered Taaaz 500 gold coin for a “simple escort and protection service.” On their way to him they've encountered a slender man dressed in cloak and shorts, the latter revealing his hairy thighs and legs. Shoes with curls pointing upwards adorned his feet, and a half-mask concealed his face.

The man in question was Deter Darker, the most uncharismatic mage to ever step foot in Antil. That, of course, did not deter Rad and Winslow to invite him to join them. The more the merrier!

Sir Fondleroy took some convincing from the trio before taking them on as his escorts. He'd already hired Mahlon, Xaver, and Whippold, three locals, but was afraid they'd betray and mug him as soon as they left Antil.

And so they set off.

“We are looking for a magical tower that allows only the select few in. Those who manage to pass all its tests and tribulations are rewarded with a vast kingdom, breathtaking princess, and endless riches.” Fondleroy answered Winslow's inquiries.

“I've travelled all of Wilderlands, paid many thousand gold coins to sages and wise-men, and looked into more then one unsavoury place. It was many years of work—but I believe I'm on the right trail now!”

“My friends, if my notes are correct—and there is no reason why they shouldn't be—then by tomorrow evening all of you will have posts in my kingdom. Rad, you'll be my bailiff! Winslow, captain of the guard! Deter, I'm sure we'll find a post for you as well—one where no one can see you!”

Three guard Fondleroy hired before trailed the party, frowning and sulking behind them. What will their posts be? Why are they being snubbed so?

Either way, the day was coming to an end just as they reached the jungle which was supposedly hiding their kingdom...

“Winslow, Rad, please come closer gentlemen. Do you remember I mentioned trials? Well, the first one is by the entrance. There is supposedly a creature—some sort of guardian—whom bars others from entering the tower. The legend says it was a warlord unworthy of the kingdom who is now cursed to watch over it forevermore.”

“Now, if my notes are correct—and there is no reason why they shouldn't be—this creature is awfully slow. So my plan is that the two of you sneak as far away from me as you can, and then pelter it with arrows and stones. When it is sufficiently distracted, I'll make a run for the tower and get in. From then on, just keep it distracted until I come out.”

“Under no circumstances should anyone follow me into the tower. Is that understood?” and just as Fondleroy finished, the party had found what they were seeking.

It's been hours and hours of working through the thick jungle. What stood in front of them barely made any sense, but it was what they were after none the less.

A monolithic tower nearly 150 feet tall, sparkly and blinding, reflecting the sun into whomever tries to lay their eyes on it. It was surrounded by an acre of green, lush meadow. Blush red bushes ringed the base, hares grazed the grass, and few deer frolicked on the far end of the field. It was truly a sight to behold.

“This must be it! Make small camp here. Mahlon, Xaver, Whippold, and Deter, you stay in the camp and watch that no one disturbs us. Rad and Winslow, you make your way west and shoot at the guardian... With that being said, where is it?”

There was a ten feet tall black obelisk that stood right in front of the sole entrance into the tower. It looked crooked, and black than the blackest black—as if it was sucking in the surrounding light into itself. Rad and Winslow instinctively pointed at it “That thing.”

And so they set the plan in motion. Winslow went as far west as he could; Rad hid in the overgrowth and readied his shortbow; and Fondleroy crouched behind some broken trees, ready to make a run for it.

The adventurers had been right. The obelisk reacted to the arrows and stones by transforming into a twenty feet tall pole, with two appendages hanging on each side. Both seemed to terminate with horrid hooks. Whatever was shot at it seemed to disappear. It approached the attackers slow, so slow. It didn't seem to walk, but rather levitate or glide towards them. It creaked and shivered as it moved.

A minute later, Fondleroy was almost ready to make a run for it. He was so focused on the reward that awaits him, that he failed to notice Deter sneaking up behind him.

One Rad realised he is wasting arrows, he opted to use his voice instead. Shouting profanities and provocations seemed to work quite well. Winslow managed to creep up all the way to the tower. Being so close, he could finally see the tower is really made of—some sort of blue-gray speckled stone.

“Now!” Sir Fondleroy muttered to himself, and sprinted off for the large wooden gates reinforced with iron bars. Deter followed, observing the noble making his way in. He could see him stand in front of the doors, making specific hand movements, and then operating an ornate box next to the doors. Finally, the gates opened, and he went in.

Using the opportunity, Deter sneaked up to the doors, and realised that Fondleroy hadn't completely closed them. They were ajar just enough to barely see in. Pausing to listen, Deter heard several female voices speaking in order:

“Those who would have a kingdom must be pure in heart, trusting and peaceful.”

“One must throw away the weapons of war and don the garments of love!”

“Only the pure and the worthy may break the seal and awaken the princess.”

“To the princess’ groom will pass the right to rule over the Kingdom of Duvan’Ku and possess its treasures.”

As this was happening, Rad heard Umber Fury—Fondleroy's war horse—neigh. Making his way towards the camp unveiled a confusing sight. It looked like Mahlon was trying to pull something off the horse, while Xaver and Whippold were wrestling each other.

Being the “shoot first, ask later” type of guy, Rad immediately downed Mahlon by an arrow to the head. The other two stopped wrestling, and pulled their swords on each other.

Deter decided he listened enough. He is going in. A horrific sight materialised in front of him as he was to lay his hands onto the doors. They transformed into a writhing mass of tentacles and teeth, dripping with gooey saliva-like substance. Some of the appendages lunged at him, and pulled him into the opening manifesting in front of him.

Was it through arcane means or sheer willpower does not matter, for Deter somehow managed to survive the crushing hug of the monster. Alas, that meant that he was conscious as the horror started to fuse with him.

Winslow circled the guardian obelisk, and was about to run back to them camp, when he'd seen his fellow adventurer pulled in by the doors. Unwilling to leave him be, the fighter ran up, and pulled the mage out of the horrific doors. Chunks of flesh and muscle were ripped from Deter's bones, but at least he was now on the fighter's back.

But their return was about to get even more exciting.

Twenty-foot tall levitating obelisk started to buzz and tremble. It lifted off the ground, and then fell apart into four pillars connected with a plus-shape on top of them. A deformed sphere formed beneath the crossing of two pillars. Looking into it filled Winslow with unexplainable sense of dread and doom.

“Ghjhhh... Agghhh! Hjjkklkjjj...” he growled and spat and murmured; but he pressed on, with Deter on his back. Whilst this was happening, Xaver and Whippold still fought each other, both failing to inflict any significant wounds. Rad resolved their score by head-shooting Xaver.

The transformed guard moved much faster than the levitating one. In fact, it galloped straight at heavily encumbered Winslow. But it came to sudden halt, smashing into an invisible barrier. The fighter just stepped out of the idyllic meadow, and it seemed the creature was incapable of following them. Fool's luck!

The horses were restless. Even Umber Fury, whom has seen many battlefield, seemed unnerved by something. Rad frisked the corpses while Winslow bandaged mutilated Deter. Then they made a campfire, and threw the two dead Altanians into the fire. Whippold didn't seem to protest.

“We wait for Sir Fondleroy...”

Four hours later and Vanis was out in all its glory. What a magnificent full moon was it!

“Ghhh... Ahh! Don't look! Don't look at me!” Winslow grunted as he howled. The horses went mad, ripping out the stakes and galloping off into the jungle. “HHssshhh! Aggghh!” Rad looked in horror as the fighter deformed into a hairy beast, his clothes and leather armour bursting at seams. He readied his shortbow as this creature ran into the jungle. Two yellow eyes were the last thing he'd seen of Winslow.

Whippold was too tired to say anything. This was all way too surreal for him. What the fuck has he gotten himself into?

“We watch guard until the dawn.” Rad ordered. And so they did.

“Not a word to anyone about this. Not a word.” Naked, bloodied, and filthy, Winslow returned to camp in the early morning. Unbeknownst to the fighter, Rad was most upset about lost horses. “Do you know how valuable these are! And you scared them all away! You git!”

“What's in there?” a small silk pouch was hidden on the right side of the Umber Fury's plate mail barding. “By the Barangorn!” Ten pristine pearls were in it.

“Listen, he'd be done by now. It'd be best to head back to Antil. Our friend here needs some care anyway!” 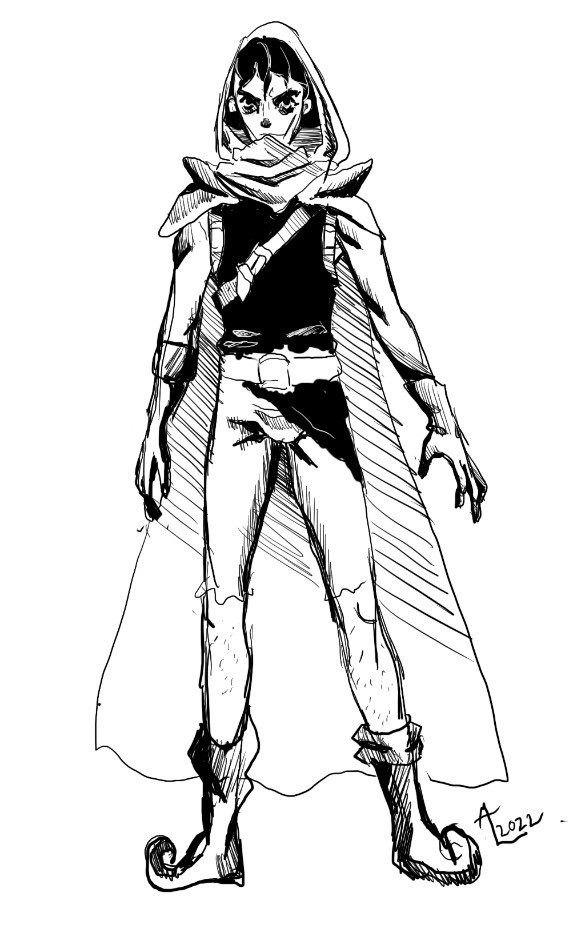