Taaaz's and Winslows's reports linked at the end of the post.

“What shall we do next?”

“Let's escort that noble, that seemed like easy coin!”

“What about that orc artefact? Didn't that sound alluring as well?”

“Yes, but we are dirt poor and wilderness is scary—will even reach the ruined fort alive?”

“Fine, what about crocodile gizzards? Let's take a walk to the jungle and seek some...”

“Oh man, jungles around here are just vile! Wyvrens, giant spiders, and all kinds of horrors lurk there!”

And so were Taaaz, Kallahan, Rad, Rux, and Gon'd'elf discussing their next adventure, when a dirty figure interrupted them.

“Lads, there is a bandit keep full of treasure just south-west of here. My friends were slaughtered like pigs, and I was left for dead, but its riches remain unspoiled!”

It was difficult to assess what was more offensive about the figure—its smell or visage—but its words were enough to motivate our brave band of delvers.

“Winslow's the name. I'll be happy to lead the way should you be interested.”

They packed their supplies into VVagon, fed their draft horses, and assembled their impressive retinue of fighting men: Samlan, Balfour, Ariun, Ehrman, and Ariad.

And off they marched, leaving the Gates of Antil behind them.

By the end of first watch, two ruined towers connected by equally dilapidated gatehouse were within sight. Dividing themselves into smaller groups, the party marched in line with some hundred feet between each team.

Rad was leading far ahead—his petite figure would surely allow him to scout the ruin efficiently. It was sunny, as most days in Altanian peninsula are. Birds were chirping and wildlife was freely moving around. It was as nature gave little care to this ruined keep marring its halcyon vista.

For two hours he carefully prowled to, and through the gatehouse, and then to west and east ends, finding absolutely nothing but bare stone, collapsed walls, and overgrown cracks. He did find four entrances, two to each tower.

Both towers had large wooden doors on their south side. Gatehouse had two facing doors midway its corridor.

The party came up with a devious plan:

Once the tower doors would be spiked, the party would enter through the gatehouse, and slaughter all there is to be slaughtered.

Spiking teams approached the towers slowly, ensuring they move as silently as possible. Archery team found a safe spot and crouched between some bushes, rocks, and broken trees.

“Why are we spiking this? Why don't we just go in?” Taaaz inquired as Winslow and Rux took out mallets and iron spikes.

Gon'd'elf saw them first, some three hundred feet to the east. Three towering figures, each at least two metres tall, followed by six human-sized figures. It was difficult to see them clearly, but all seemed to be heavily armoured and well equipped with swords, spears, maces, and bows.

Unwilling to reveal his position, he opted to fire an arrow towards the east tower as a warning signal to his friends.

“That's it; this is the signal!” Taaaz yelled enthusiastically, and went straight through the doors as a living incarnation of a battering ram, his retainer bravely rushing in. Winslow and Rux looked at each other, and fled in Gon'd'elf's direction.

Kallahan and his crew just finished spiking the west tower, and opted to flee on the first sight of commotion.

The approaching figures started sprinting toward the east tower, yelling and roaring. The elf recognised smaller humanoids—hobgoblins. The larger were unfamiliar, but had a rather imposing frame, with bulging muscles covered in fur. Their faces were akin to tiger's—if the tiger had been hit with a shovel.

Approaching monsters seemed oblivious to anything but the man who just broke into the east tower; they moved with hunter's intent.

“Oh... Ooooh, the Reverie calls!” the elf entered an entranced state so deep that Rad couldn't wake him up, no matter what he did. He tried slapping, pouring water, licking his ear; everything he could think of!

Taaaz bashed in through another doors, finding a dark junction in front of himself. He motioned to his equally bloodlusty retainer to come closer so he can hand him the lantern, but a sudden scream was all he could hear. Ariun fell into dark pit, not a sound to be heard from him.

“Hey... Are you OK? Are you alive?” Taaaz's questions went unanswered. He ran into the closest room he could find, but was caught by two tiger-headed creatures, followed by a number of hairy humanoids.

Layout worked in his favour—since corridors were barely five feet wide, the pursuers were forced to fight one by one. He placed the lantern onto the ground in the corner of the room, unheated his great sword, and faced the towering monster.

Three hobgoblins and one tiger-faced monster were still outside, unable to squeeze in. “Fire!” Gon'd'elf roared as he snapped out of his narcoleptic attack. Rux, Kallahan, Samlan, and Balfour rushed them, oil flasks at ready. Winslow fell back, hid behind some rock, and started pelting the monsters with stones.

Alas, all but the elf repeatedly missed. Rux, being the first to come within throwing range, also missed with his oil flask. Hobgoblins used the opportunity to mob him. One of them grabbed him by the arm as he was about to light another flask, and chopped it off with its axe. Other two then wrestled him down to the ground, and beat him to a pulp. He was defiant until the very end.

Taaaz, inside the east tower, was trading blows with the monster. Both were strong and pumped, dexterous and agile—but the fighter was better! Not even a crab spider dropping from the ceiling broke his concentration. The monster swung its morningstar, missed the warrior by an inch. Taaaz responded by dropping his greatsword low between the attackers legs, followed by a might swing upwards; cleaving the monster in half.

Then he grabbed its big head, smashing it with his gauntled fist; ripping out its still pulsing throat. Unrelenting in his brutality, he grabbed still the monster still twitching remains, and threw them into the hallway he fled from, slamming the doors behind him.

Outside, the party rained arrows, rocks, and oil flasks at the charging hobgoblins. Gon'd'elf took two down, and Balfour set one alight. Large, tiger-faced, monster charged in, swinging wildly. It took four arrows and six blows to take it down. It was Balfour, still enraged with Rux's death, who mercilessly clubbed the creature on both sides of its head.

“Shall we go in to save our friends?”

“Nah, he made his bed. There'll be time for revenge!”

Taaaz, dripping with blood of his enemies, and breathing heavily observed the room he was in. It was small, with a wall-to-wall gold-green tapestry. He could hear a sound of crashing doors from behind it. A similar creature to the one he just eviscerated stepped out from behind the gold-green tapestry and lunged at him with its bare hands.

Brushing off its blows, the fighter struck it several times, bringing his sword down on its skull. As the monster dropped to its knees, Taaaz continued hammering its head with the pummel of his greatsword, until there was nothing but mashed brain jelly all over the floors, walls, tapestry, and himself.

The room now thoroughly reeked of blood and fur. A quick frisk of the corpse revealed eight gold coins. Scuttling could be heard from behind the tapestry.

“Let's head back to the camp. We can regroup there and figure further course of action. It's just four hundred feet away. Let's go!”

The warrior used his two-handed sword to unhinge the top-left of the tapestry, provoking the crab spider to lunge at its own death, impaling itself on Taaaz's greatsword.

Wounded and exhausted, the only logical course of action was to plunder this small room for all its riches. A closer inspection of the tapestry revealed a motif of a hart chased by hounds and riders. The colors are now faded, and several large holes ruin the composition. Moths have also been at the tapestry, and any light shone on the far side of the tapestry is visible as pinpricks of light coming through the tapestry's surface.

He also noticed a chest by the north-west wall. It was old and with a broken latch. Some rubbish and silver coin were all its contents. Taaaz knelled down, and started folding the tapestry so he can put it into his backpack.

As he was doing so, both doors burst open, and the small ten by fifteen room was flooded by goblins and hobgoblins, surprising the fighter. He tried to swing, but alas, missed them all.

The sheer quantity of small critters was too much for Taaaz to handle, and they quickly crawled up his legs and pulled down on his arms. One of the hobgoblins squeezed him in a bear hold, while the other smashed the warrior's helmet with a mace.

Wrestling him down to the ground, one of the goblins gleefully clawed out the fighter's eyes, while the others repeatedly stabbed him into the neck.

As they ran to their camp to take a breather, a mass of creatures poured out of the eastern tower. The largest of them carried a bloodied greatsword.

And Taaaz's illustration of the keep: 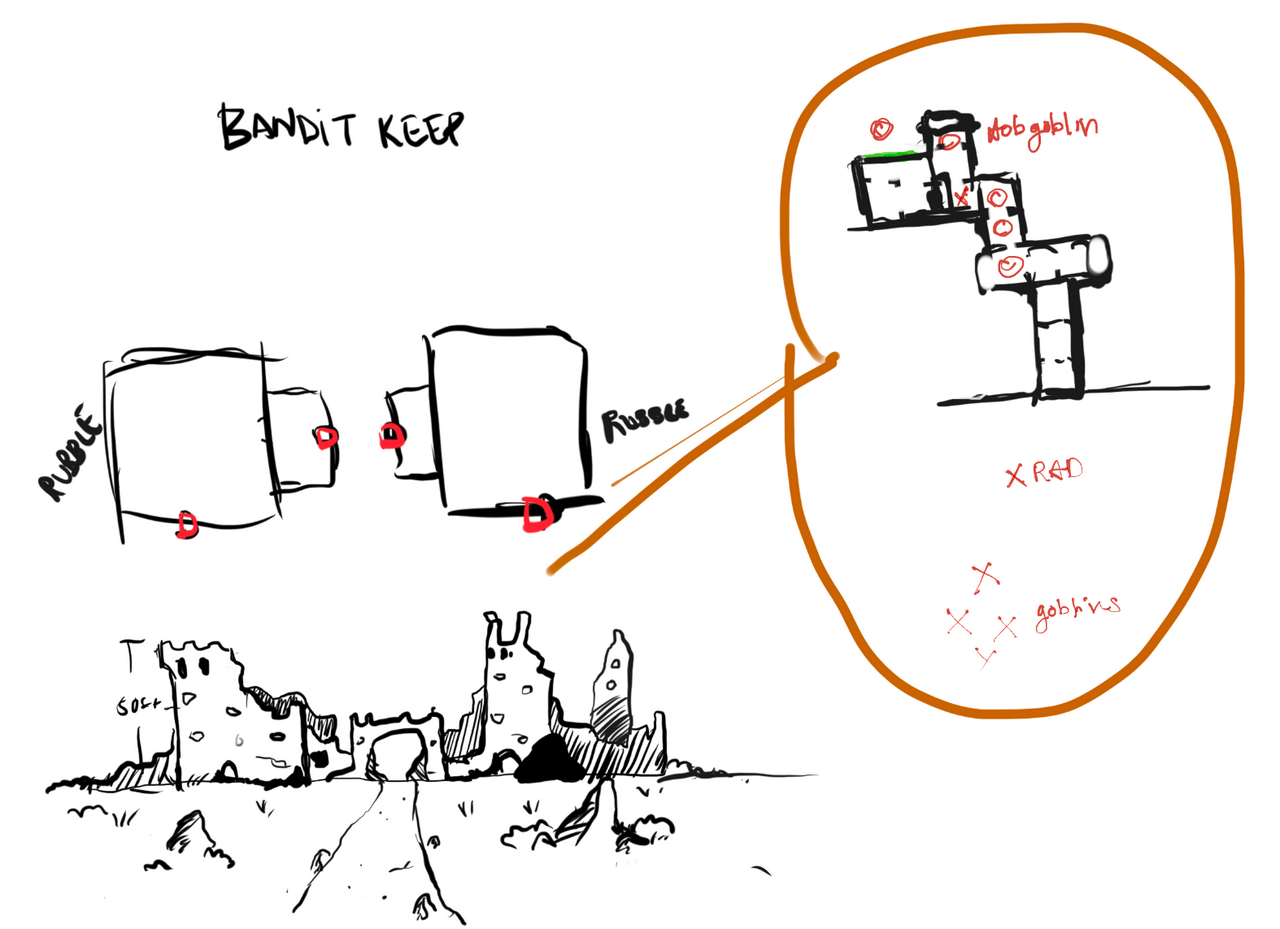