Kallahan's and Remli's reports linked at the end of the post.

“You recusant scum should face your reckoning any moment now!” the lead gate-keeper was frothing, pacing nervously between Brother Kallahan and rest of the party. Aimon and Samlan seemed quite anxious with the whole things, whilst Taaaz was primarily concerned about his sack of fermenting monster parts.

“Oooops...” Gabriel exhaled slowly, as he “accidentally” dropped one of his coin-filled sacks “How clumsy of me!” His ploy worked—even the guard whom was scribing notes in the corner lifted his head with curiosity.

“Perhaps we could come to an arrangement? You fetch your letter-boy back, and let us pass without any hassle? In return, you get 200 gold pieces—years of salary!” Gabriel ignored Amanda's quiet protestation “Oh my, you'll crash the local economy.”

“Come on Pol, it's a good offer! Grand Inquisitor has been executed, these poor folk were merely his victim. Look at them! Tell me, have you seen more honest folk around here?” one of the guards pleaded with the gate-keeper. He was soon pushed into another room by other guards.

Rux, a fresh arrival was observing with great interest—an action that Gabriel hadn't fail to notice. “Young man, today is your lucky day! Would you like to earn such treasure that you can afford to bribe people with such coin without worry?”

“Indeed, my day had been blessed!” Rux clasped his hand piously “It'd be an honour to follow your path.” Perhaps he wouldn't be so enthusiastic if he knew Gabriel's actual path, but that is for some other story.

“Enough of this peasant life. We shall have the finest Antil has to offer!” And so they went to Friend's Arms, where one is pampered and well-fed and provided a private room with proper iron-frame bed for ten gold coins a night.

Amanda, though, opted to head for the “beach” with two blonde hunks. After all, girls just want to have fun.

Three-day shopping spree and a funeral.

On first day, Amanda continued partying, meeting Hulking Rocco. She had him around her finger, doing her bidding as she pleases. Taaaz sought a buyer for his rotten monster parts at the Walled Bazaar. Most shooed him away—given his bloodstained and unkempt appearance—sans one ardent merchant.

“I'm afraid I have no use of this son! But anyone brave enough to skin such beast is surely brave enough to fetch me some Wyvren spit! Trust me son, I will pay good coin for that. In fact, I'm happy to give you 10 gold pieces right now for that sack of rotting flesh—as goodwill. What do you say?” few pats later, Taaaz had a list of bodily parts, fluids, and excretions, Great Orbaal is willing to pay for.

Gabriel, Kallahan, and Rux went to the main square to see if any accommodation was offered at the bulletin board. They were proper adventurers now, rich and famous, and they ought to purchase they own place. An abandoned whorehouse and impounded vermin-infested warehouse were on the offer.

Kallahan and Rux turned around to see an angry looking dwarf charging Gabriel, his battleaxe swinging through the air.

“What has gotten into you?!” another dwarf ran after the raging one “Calm down Goreaxe!” Alas, he was too slow, but luckily, Gabriel was quick enough to avoid the blow.

“Pathetic strike, dwarf!” Gabriel Faria never forgets faces. And he knew this one quite well, for he was always on the lookout. This was a jeweler he charmed many weeks ago. “I'll hack you, limb by limb!”

“Oh, will you now?” elf quipped back, chanting arcane words and waving his hands. “Oh no, not again, you won't!” the dwarf grunted through his clenched teeth, spittle flying out, his eyes becoming even redder—in fact, Gabriel could see few of the capillary tubes pop.

Kallahan and Rux mixed in with the crowd. Gabriel turned around to flee. Goreaxe's battleaxe sunk in between his shoulder blades, sliding down all the way to his tailbone. Masked avenger fell to his knees, vomiting blood.

“That soon of a bitch! Look what he did to me! And I was abstaining for fourteen years!” he yelled as five dwarfs grappled him. By now local guards got involved as well.

Kallahan ran up to chopped up Gabriel, unleashing exasperated “Noooooooooo!” as he fell to his knees. Rux attempted to consoled him, albeit a bit awkwardly.

The elf might've been a harsh master, but he willed all his belonging to Taaaz, his squire. The party arranged that his body will be delivered to Faria family, where he shall receive a proper royal burial.

Taaaz wiped his tears with all the coins he inherited, and went back to Friend's Arms. There he met abhorrent Remli Smither, whom he happily recruited. The rest went back to Hare's Head Inn, where one can sleep and eat well for one gold coin.

Over the next few days they procured a wagon and two draft horses, two canoes, plethora of adventuring and delving equipment, as well as three new retainers: Arian, Balfour the Faun, and Rocco.

They set for lake tower on the morning of next day.

Spring was in the air. Birds chirping, flowers blooming, nature erecting itself as far as the eye can see. The tower was not even a day's walk away.

There it stood, sixty by sixty by sixty cube of gray stone, smack in the middle of intrepid lake with green moss and vegetation demarcating it from the water it poked out of.

It had some unique quality of solemnity and silence to it. In fact, unlike the surroundings, there was very little wildlife here.

A massive twenty by twenty feet wooden gates, some twenty feet above water level, were the only visible feature. Kallahan and Remli boarded one of the canoes and went to investigate.

Rux sought a safe camping spot, for night was about to fall within an hour or two. Amanda worked on hand drills with Rocco. Taaaz and retainers watched guard over lake explorers.

The tower seemed to be of rough, but solid, build. It did look a bit uncommon, as if it was cast out of one piece, versus assembled from hewed stone. Either way, nothing to alarm our enterprising Remli.

Working his nimble limbs, he scaled the wall, and gates themselves, trying to wedge his fingers in the clearance at the top. Alas, the gates—which now seemed to be some sort of drawbridge—were too bloated to be moved. His keen eyes did notice three slits in the walls: one above him, and two to the side.

Climbing further up, he could see the slit was ten feet wide and two fists tall. Wedging his knee inside, he tied a dagger to one end of the rope, and pushed it into the tower to create a makeshift anchor.

Kallahan carefully pulled on it as a test. That, indeed was a smart choice, for the dagger wobbled and fell out, almost piercing the priest. Rux, having secured a perfect camping spot, was now watching with interest from the shore.

He could see Remli falling straight down whilst maintaining a very stiff body posture—as if he was paralysed or petrified. He could see Kallahan jumping backwards, as if to stabilise the canoe, and then jumping forward, as to grab Remli. Alas, it was too little, too late. The thief rotated mid-air, scrapping his face for at least twenty feet, ultimately ending up as a broken mess.

A brief burial later, and the party was discussing their further course of action. “This looks hard. Lets kill some lizards instead.” Taaaz proposed.

What will they do next? 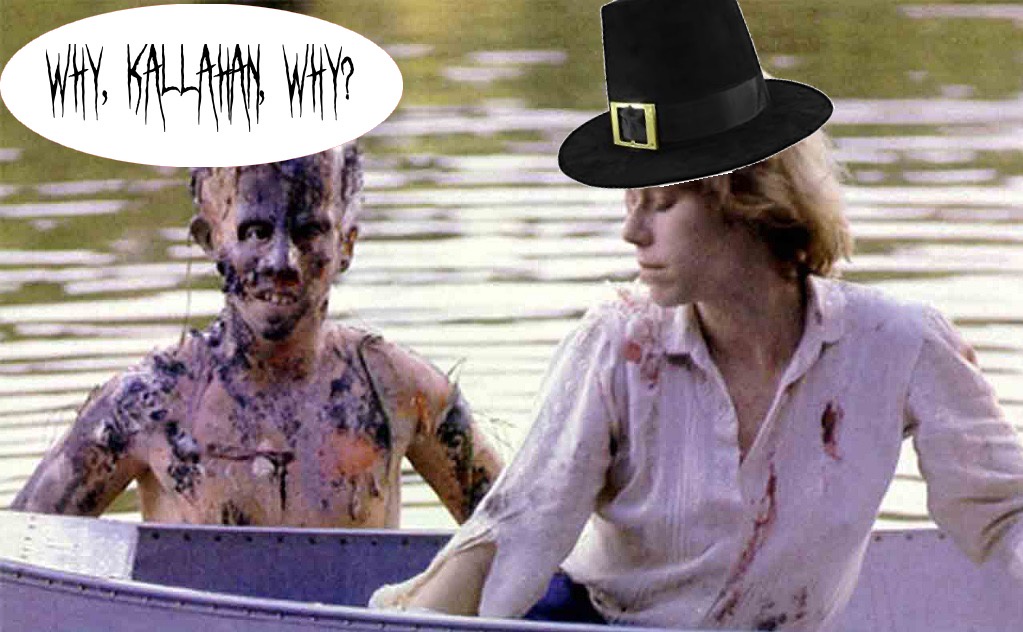